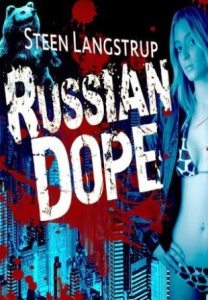 *Dope as in urban slang for good/entertaining. Only junkies would think it was possible to rip-off the Russian mafia and get away with it.

Enter Laila and Phillip, an adorable, coke sniffing couple. She is living with him in a slum apartment until she can find something better. He’s too stupid and/or stoned to know better.

Enter “The Bear” a member of the mafia outer circle whose job it is to have a portion of the gang’s cocaine held by his own contacts until the drugs are needed for distribution. He has come to Laila and Phillip’s apartment to pick up his 2-kilo package.

Enter Paul who has arrived unexpectedly to spend time with Phillip his step-brother.

It all then goes ‘to hell in a hand basket’ (as my mum would say.) The book has a memorable start scene which I could visualize unfolding as I read. Perhaps it’s the thought of the colder days ahead on this cool autumn day.

It’s not a long book and the transition between flashbacks and current time could be a bit smoother. Overall it’s a fun read with a karmic ending. Steen Langstrup is a known entity in Denmark who is finally bringing some of his Danish talent to English readers.

Exits? Read to find out who makes them.