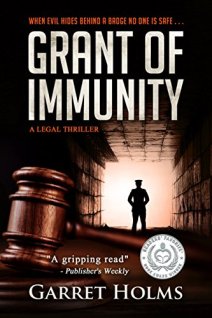 Some lives are a wheel of misfortune

There are many moving parts to this book. It reminds me of a Ferris wheel. With every revolution some new matter comes about and the wheel keeps moving with you as its willing passenger.

It’s 1976 and 20 year old Snake and Daniel a 15 year old teenager are drinking at the Hollywood Reservoir with Snake’s girlfriend Sarah. Daniel is feeling awkward with how things are playing-out and then his discomfort changes to horror when things go badly wrong.

Now in 1995 Daniel Hart is a Superior Court Justice and Jake Babbage (Snake) has become a Sergeant in the LAPD. He uses his badge and gun as weapons against women. At a local cop hang-out he comes across Erin, Sarah’s daughter who is as beautiful as her mother was. This ignites a fire in Babbage to recapture the feeling of that night in 1976. He begins his campaign of intimidation.

The debut book by Garret Holms, make that Judge Garret Holms, has all the markings of a legal thriller: interlaced plot, aberrant cop and psychodrama. As for accuracy I’m sure Holms has taken care of that end of things quite well because we are heading for the courtroom.

Many interesting turnabouts in Grant Of Immunity with good cop Fitzgerald and a determined DA Reynolds who is running against the judge in a nearing election. It’s a decent first book though more character depth needed to keep me happy. However, I suspect the second one will be even better.