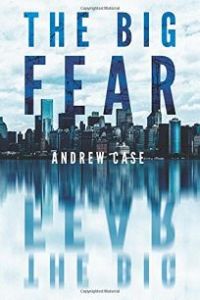 in his latest book, The Big Fear, Andrew Case brings us into the world of New York’s Department to Investigate Misconduct and Corruption (DIMAC) and it’s new head, Leonard Mitchell. The opening chapter of his book brings us aboard a strangely silent cargo ship where things go wrong for Detective Ralph Mulino.

An undercover cop is killed and Mulino is now under investigation by DIMAC. Mitchell isn’t buying the scenario that paints Mulino as a rogue cop but he will investigate.  A contact made by a woman who pawns off her business card to Mitchell with the word Danger! on it leads him farther afield than just the Mulino case.

Now it’s Mitchell who is a target and Mulino seems just around the corner working to prove his own innocence. The NYPD and a Wall St. investment firm have a smell of rot that’s pervasive. Trust is a dangerous game.