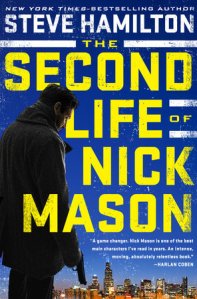 “This isn’t freedom. This is mobility.

Don’t get those two things confused.”

Nick Mason is under contract. No signature appears on any document. Only his word to a crime lord who arranged his freedom a few years into his 20-year sentence.

He is moved into a luxury condo where, food, drink, clothing and a 1968 GT Fastback are there for his use. Nick was a car man after all. Stealing and selling cars was his lifestyle. It was detouring from this that got him locked-up. It also lost him his wife for whom he had promised to give up the life.

Now Nick is doing things that he never imagined because he can’t ever neglect to answer his phone. How long before he is completely soulless? Steve Hamilton has written a winning character caught up in a situation that offers no escape.

Hamilton is the two time winner of the Edgar Award and a New York Times best seller of The Lock Artist and the Alex McKnight series.

The Second Life of Nick Mason will be released on May 6th.