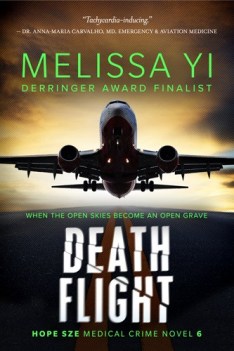 Just a sneak peak into Autumn and no better book than this new one by Melissa Yi. It’s number six in the Dr. Hope Sze medical crime novel series.

Dr. Hope Sze flies from Montreal to Los Angeles to see Dr. John Tucker, one of the two men she is in love with. He’s recovering from major surgery in the city of angles.

But Tucker is at the airport waiting to fly to Montreal to see Sze. They are on the phone when she hears a woman scream in the background and Tucker hangs up. Suffering from PTSD, Sze is in a panic on her way to the airport fearing the worst.

The situation gets sorted more or less, but it’s quite a mix of passengers that end up on the plane to Montreal. Including Gideon the service dog whose presence makes a man Sze calls Mr. Money, go ape-shit crazy. You are in for quite a flight folks as it’s non-stop action all the way back to Canada.

If you are a regular reader, you will recall that I have written about Yi’s books before: Human Remains and Stockholm Syndrome. There’s good reason, her work is solid and her love of two men seems very real and entirely poignant.

A Blog Devoted to Interiors

A blog about the love of reading, books and new ideas

Exploring What Captivates, Inspires, and Intrigues Us.

A journey from the freezer to the world, through a human oven

Post, news, diary... All the world around me, ALL THE WORDS AROUND YOU

Age is Only a Number

You're not limited, but liberated with age to do whatever you want to.

Living and Learning in Alberta and California