My second Noir at the Bar Toronto proved better than the last. The reason of course was that over the intervening months I got to meet many authors as well as to befriend some of them in Toronto and other environs. 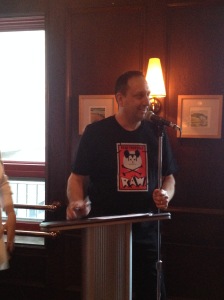 To say I was in a readers and writers heaven wouldn’t be too fine a point. The energy, humour and comradery was great. Hosted by authors Tanis Mallow and Rob Brunet, Noir at the Bar Toronto was everything a crime fiction groupie could hope for and I’ve got the pictures for proof.

The evening featured several author a few of which are award finalists: 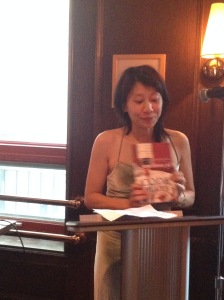 Melissa Yi read from two of her books, then mesmerised us with Derringer Award finalist short story: Because. 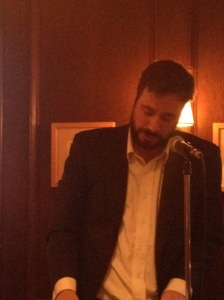 Clifford Jackman took us back to 1891 Oklahoma and unnerved us with: The Winter Family.

Jeff Markowitz reading from Death and White Diamonds AND 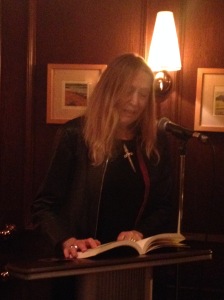 Bianca Marais read from World Enough and Crime (Finalist for the 2015 Arthur Ellis Best Short Story Award) and you could have heard a pin drop. 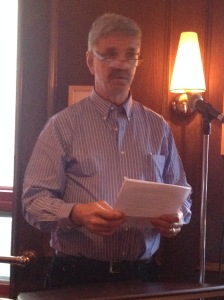 Jeff Kenny held us hostage with his excerpt from The Spark. We were in the book with him.

Andew Pyper read from The Damned and we all gasped, really we did.

Yes, he is an author crush and I’m shameless about it.

The evenings amazing hosts: Tanis Mallow didn’t read from her short story Nightshade (placed next to Jeffrey Deaver) in the Murder at the Beach anthology but read instead from a work in progress which had us hoping for a book soon. Rob Brunet read his short story Road Rage and you can read a review of his book Stinking Rich here. They both have very dark minds which is why I love them.

There will be another Noir at the Bar Toronto sometime this September. You should seriously think about attending if you’ll be in the city.

P.S. there’s still time to win a copy of Benefit of the Doubt by Neal Griffin – details here