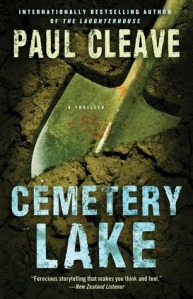 How much trouble can one ex-cop turned PI get into? Read Cemetery Lake to find out and you’ll shake your head. New Zealand’s Paul Cleave has created quite the character in the impulsive Theodore Tate. He keeps you busy wondering how things can possibly  work out and he does it with sardonic humour.

As Tate presides over an exhumation, the body of girl is discovered in the coffin belonging to a man. A torrential downpour on this scene turns into a horror show as bodies begin to pop-up in the lake steps away.

Tate is filled with guilt. If he had investigated the death of the man who was supposed to be in the coffin two years earlier, he is positive the circumstances evolving around him would be different. Now he drinks and stalks Father Julian, the Catholic priest that Tate believes knows who is killing people and refuses to break the confessional seal.

This is the third book in the Theodore Tate series preceded by The Cleaner and The Killing Hour. Now I have to go back and read these books and I suspect a few more.

Recognition for his work:

Ngaio Marsh Award, the Saint-Maur crime novel of the year, shortlisted for the Edgar, the Barry and the Ned Kelly.