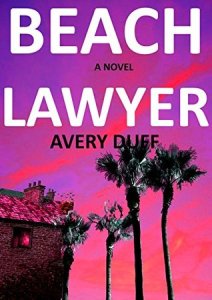 Robert Worth is athletic, handsome, intelligent and hardworking. Five years into his prevailing plan he’s about to make law partner at a prestigious Santa Monica legal firm. He discovers how cold and corrupt the world can be.

His mistake, going against senior partner Jack Pierce who fires him. Blackballed and struggling, Worth takes a case representing a former client that Pierce dropped, and is suing for malpractice. It’s a victory when Pierce agrees to settle out of court. What should be the end is only the beginning.

In Beach Lawyer, Avery Duff  has written a likable character who believes he is on the right path. Even as he stumbles and backslides, anger drives him forward and sideways. The story delves into the world of legal filings, and negotiation, with an intensity that leads into deeper mysteries.