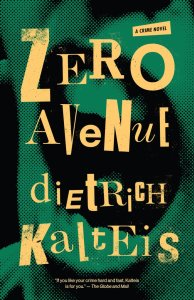 It’s 1979 and the Vancouver scene is ripe. Flash guitar riffs, apocalyptic lyrics, crashing drums and fire onstage. Back when Mary Armstrong (aka Mary-Jo Kopechne) played bass for the Modernettes. Hooks and rhythms all relevant, all pervasive.

Frankie Del Rey is close to making it. All she needs is enough money to cut a demo record. She plays where she can, scraping by on booze and drugs for payment, anything to be heard, anything to be recognized. Hanging out at Johnny Falco’s club, thinking he looks pretty good.

Frankie runs drugs for Marcus Sakey who stepped-up his driver Zeke to be the front man for moving product. Everyone now answers to Zeke, no one likes it. It’s an abrasive world, of dealers, users, musicians and bar owners. Sometimes all four rolled into one. The deals and deal breakers keep coming and Zeke’s brutality as enforcer is a stoked fire.

Rude, biting and rough, the denizens of east-end Vancouver have their own agendas.

PS – Subscribe to Murder in Common to win a copy of Zero Avenue. Details here.

Delighted to bring you this insight from Dietrich Kalteis on his books, writing process and music 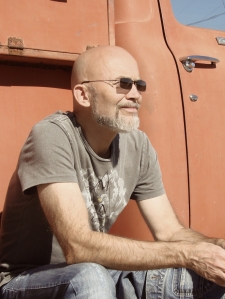 First off, I’d like to thank you June for inviting me to write about my new novel.

Zero Avenue is a crime story set during the Vancouver punk scene back in the late seventies. The story follows Frankie del Rey, an aspiring musician determined to launch her music career and raise enough money to cut a demo record and take her band Waves of Nausea on the road. To make it happen Frankie runs drugs for a powerful dealer, a guy named Marty Sayles, who rules the Downtown Eastside with a fist.

Things work out until she gets in a relationship with Johnny Falco, the owner of a struggling club. Once Johnny finds out that Marty’s got pot fields outside of town, he raids one to make enough cash to rescue his club. When he gets away with it, Frankie’s bass player gets wind of it and figures that was easy enough and tries to rips off another one of Marty’s fields. When he goes missing, Johnnie and Frankie try to find out what happened. Meanwhile Marty Sayles comes looking for who ripped him off the first time — a trail that leads straight to Johnny and Frankie.

The setting seemed perfect for a crime story because the punk scene was so raw and angry. It had an edge and this us-against-them outlook that threw a middle finger to the status quo. And Vancouver was such a polite, sleepy backwater town back then, so there was this sharp contrast that created a natural tension. The late seventies were also a time before Google Earth, Google Maps and satellite imagery, back when pot fields were a lot easier to hide.

I wasn’t living on the Coast during those days, but I did know people growing up who were like some of the ones in the book, right down to a couple of guys who went to rob a pot field and had rock salt shot at them.

Listening to the music of the time and talking to people who did remember the times helped me get it right. And there were some great books on the subject that filled in a lot of the details, and an awesome documentary by Susanne Tabata called Bloodied but Unbowed that was jam-packed with clips, music and tales from those Vancouver punk days.

When I write, I always play music that goes with the vibe of what I’m writing. It gets me into the story; so for the nine months it took to write the novel I listened to punk from that era. I got my hands on as much of the early Vancouver sound as I could find, bands like D.O.A, the Subhumans, Pointed Sticks, the Dishrags, Payolas, Braineaters, Young Canadians and the Modernettes.

I also threw some Toronto bands on the playlists, like the Viletones, the Demics, the Diodes and the Cardboard Brains. And one of my favorites, Teenage Head from Hamilton, along with the Ramones, the Stooges, the Clash, the Sex Pistols and more.

The one thing I wasn’t sure about when I started penning the first draft was could I pull off a female lead character, but once I got going it all worked out. To get any character right, the dialog has to sound unique and natural, like their words are just flowing out. I like to let the dialog do the heavy lifting over the narrative, and when it felt like I was just typing their words, then I knew I had it right.

I love the scheming and the characters’ exchange of words, particularly when they say one thing and mean another, which sometimes reveals more about them than the actual words. And no matter how wrong or devious, I love when they show that sense of righteousness, that ‘they had it coming’ attitude.

And I like to throw in some levity which always lends an interesting balance to the tension of a crime story. While there’s nothing funny in the crimes themselves, sometimes it’s the characters’ cleverness or the lack of it, and sometimes it’s their desperation that leads to moments of dark humor. And I think there’s plenty of it in this story.

After Zero Avenue comes Poughkeepsie Shuffle which will be released by my publisher ECW Press next June. The story takes place in Toronto in the mid-eighties and centers on Jeff Nichols, a guy just released from the infamous Don Jail. When he lands himself a job at a used-car lot, he finds himself mixed up in a smuggling ring bringing guns in from Upstate New York. Jeff’s a guy who’s willing to break a few rules on the road to riches, living by the motto ‘why let the mistakes of the past get in the way of a good score in the future.’

Dietrich Kalteis is the award-winning author of Ride the Lightning, The Deadbeat Club, Triggerfish, House of Blazes and Zero Avenue. Nearly fifty of his short stories have been published internationally, and he lives with his family in West Vancouver, British Columbia.

You can visit him at dietrichkalteis.com or at ECW Press. He blogs regularly at Off the Cuff and at 7 Criminal Minds.