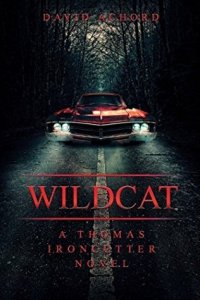 Thomas Ironcutter has big weight over his head. His wife committed suicide, the police department where he was a detective thinks he did it. He waits for the inevitable.

He’s moved on as he can, there is little of the wounded detective in this book. He is pragmatic and interested. He loves his cigars. As he introduces us to the people in his life (enter biker, stripper and hacker characters) its all intrinsic and well integrated.

Ironcutter is asked to look into the suicide of a man, whose wife believes he was murdered. As the investigation proceeds, things begin to link in unexpected directions. None the least is the discovery of his beloved 1967 Buick Wildcat stolen from him years ago.

Characters, pacing, depth – Wildcat has it all and I want to read more from David Achord.